The weather forecast looked promising for north-central Kyushu, with a large calm spot forming in the upper layers, likely to be the result of meeting convergences that were not resolved in these GFS model data.  Combined with a high inversion layer at 2400m with an almost equally high cloudbase (graph not shown), it seemed clear we should go to Aso for Sunday and take advantage. 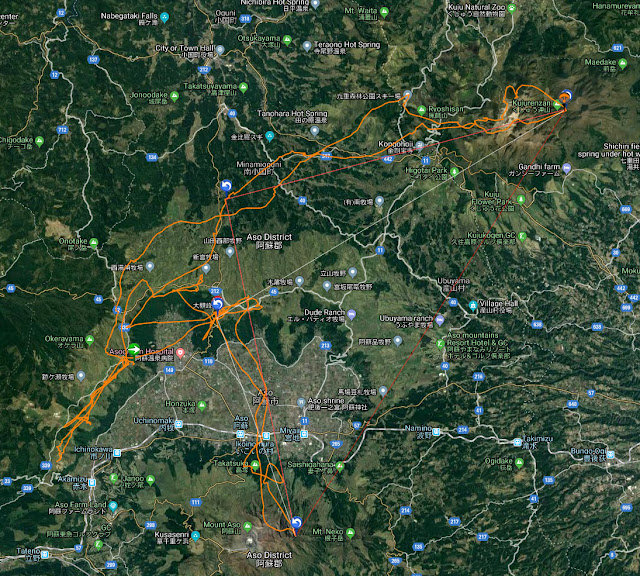 And indeed, the forecast matched expectations.  Quite unusually for this area, calm average winds allowed free travel over a 60x60 km area (at least), as long as one could find and follow the various convergence lines.  Away from the convergences, and/or down low, rather stable and windy conditions prevailed.  Thus, gliders taking off from the usual Daikanbo launch had trouble getting up and were even bombing to the base of the caldera.

I chose the Kabutoiwa launch, where the rim is south-east facing and works much better in the morning.  Taking off at 11am into a lot of lift already, I quickly went about 10km southwest to Futae pass and back, then crossed the wide 'bay' in the crater rim eastwards to Daikanbo, where I worked hard to break 1800m, the usual minimum altitude which allows movement.  It wasn't working so I crept back west toward Kabuto, this time forced low and scratching along the the rim of the bay.  A convergence emerged ahead over Kabuto, stretching north-east from there, so I took some risk of bombing out, which duly paid off and I was now near 2000m over Kabuto.  Things looked easy and it was still early so I detoured for another out and return to Futae, regained the convergence and set off north-eastward.  The convergence curved gently to the east and led me straight to the Kuju range.  I noticed there was quite a lot of north wind originating from the basins to the north and the distant sea, brewing up a cloud bank over the range.  I proceeded just along the southern end of this bank, just south of the convergence proper so as to avoid flying in the clouds.  After traversing the whole range I  reached sink at the east end of Kuju.   Eeasterly seabreezes were in evidence. 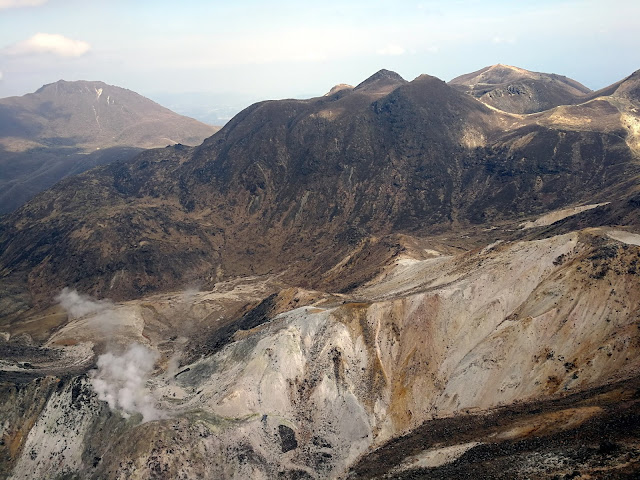 I could have easily returned but instead, remembering the northerlies on that side of the range, I set off bravely north-westward into an overcast no man's land, soon sinking below the height of the steaming volcanic peaks (at nearly 1800m, the highest in Kyushu).  But, as expected, I soon hit the north winds which allowed me to ridge-soar several steep mountain faces, and regain the convergenence line.  This was perhaps the most enjoyable part of the flight, adventurous and scenic.

The day's lift was maxing out and it was hard to see what to do next with clouds everywhere.  In retrospect I could have easily gone as far as the isolated Mt. Waita about 10km to the N but the extensive overcast meant I would have to trust the convergence and not get low.  I decided to follow my way back to Daikanbo.  The convergence hadn't moved so I had to bypass Daikanbo and end up at Kabuto yet again.  Had I gone straight to Daikanbo I would likely have been caught in strong southwesterly headwinds, but actually where I was the wind was easterly or nil.

From Kabuto the wind was west again and it was an easy downhill run to Daikanbo where I thought I would top-land and call it a day as it was getting quite late.  But, the famous 'afternoon glory' convergence line appeared only a little ways east, and it was too tempting to pass up.  As it turns out, two more gliders from Daikanbo hooked up with the convergence line and joined me on the out and return trip south to Aso's main summit Takadake. 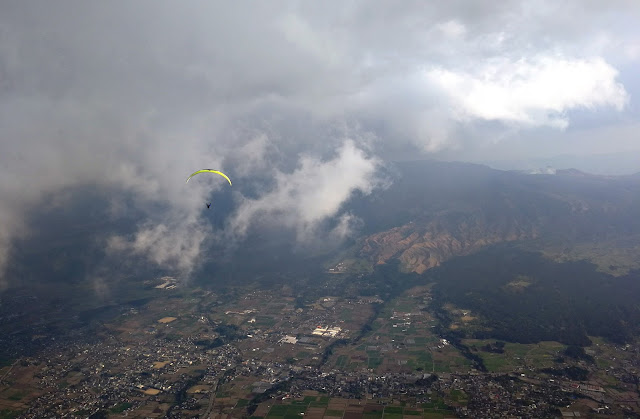 This was the first time ever anyone else ever rode this line, and the first time in my experience that it was both so conveniently located not too far to the east and also not too strong as to require great skill to ride safely.  We enjoyed the trip back and forth as if we had motors attached! 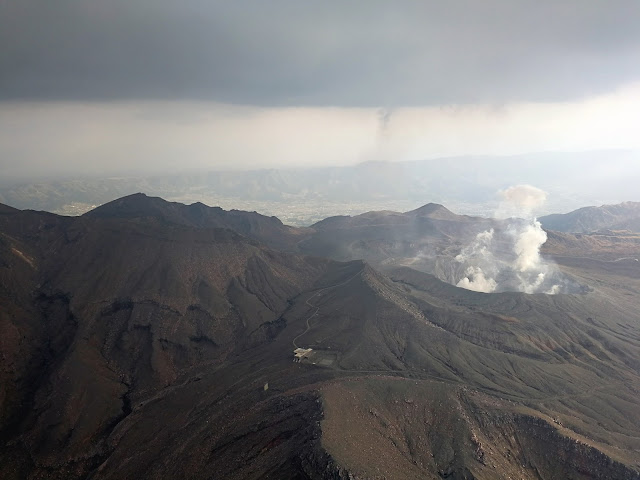 The active Aso crater was snoozing today, its smoke trailing alternately to the west or the east as the convergence line moved back and forth.  To the east, a large grass fire was burning, and the air was full of soot which got in our eyes.  The convergence line ended abruptly before the actual mountain, but I ventured to ridge soar the rocky ridges for a while before returning (much lower) to reconnect for the way back. 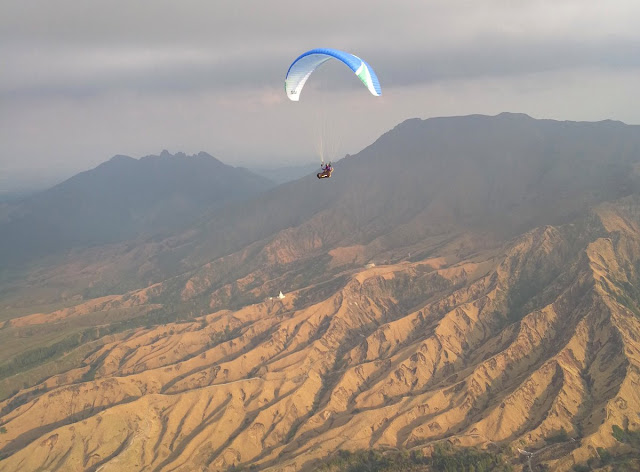 All three gliders made it back to Daikanbo where we top-landed with smiles on our faces.  What a great day!

My XC distance froze at 87km as I ran out of turnpoints with this rambling flight, but the trip to Takadake resulted in a 66 km FAI triangle, worth a few more points on X-Contest. 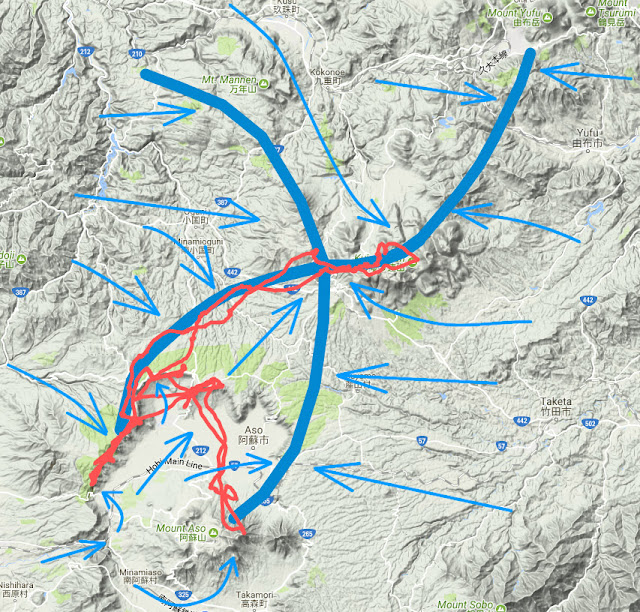 This chart illustrates a common (but by no means fixed) upper convective layer convergence pattern (thick blue lines), and lower level winds (blue arrows) in the Aso-Kuju area.  My flight is superimposed in red for reference.  The convergences can of course appear, disappear, and move considerably; this is especially true for the 'afternoon glory' line with runs N-S from Kuju to Aso.  In fact, my track indicates that this time it was considerably further west than marked on the chart.

Flying on big islands such as Kyushu does have the advantage that winds from all directions may meet near the center of the island, creating these wonderful skyways.  It takes a variety of skills running them of course.  It is usually very important to stay high and monitor their movements, which may be sudden and unexpected.  Always try to stay on the side which has a higher cloud base (in this case, usually west and/or south of the lines), and be careful of the moist air sneaking underneath you and enveloping you in cloud suddenly.  If you see clouds forming on the clear side, hit the speed bar and head in that direction as quickly as possible, even and especially after you find yourself in fog, which almost certainly will happen in that situation.  Near the line itself expect very strong lift (10 m/s is common) and associated turbulence.  In fact, if it's rough you know you are in the right place! Keep in mind that on the moist side over-development may easily occur.  Don't take chances when the forecast shows unstable conditions.  Convergences peak in strength later than individual thermals, usually around 4 or 5 pm, and this is when the danger of sudden OD is greatest also.  When low and off the mark, always run downwind, whichever direction that may be.  In the case of the afternoon glory, which usually exists as a vertical wall all the way to the ground, if you find the sweet spot you can make an amazing low save from as little as 100m AGL, but it may be very rough!  Anyway, one could write a book about convergences.  This is just the tip of the iceberg! 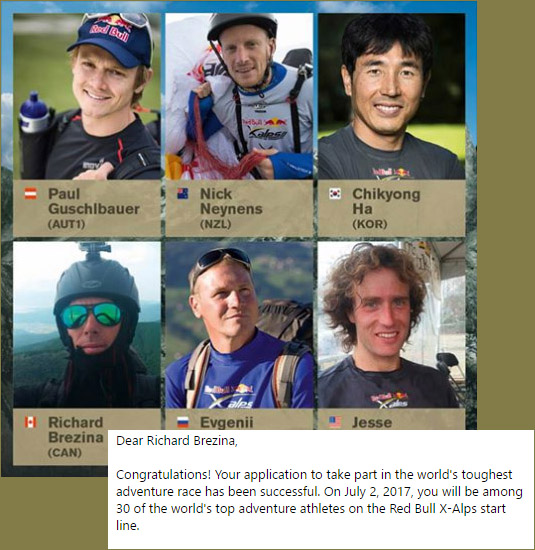